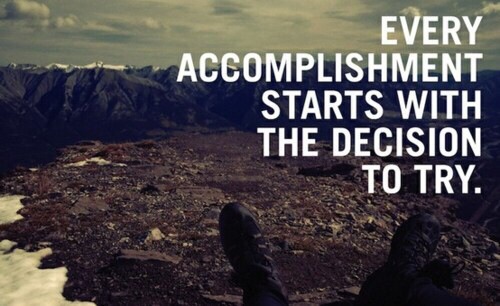 (Do not remove any picture credit/copyright)

Erik’s Fat Boy Motivation: Have you even tried? As a parent I find myself thinking those words when my kids only do something half way. The question is rhetorical in nature, but the point is to get them thinking about trying and doing their best in all that they do. My desire is for them to operate at a level far greater than anyone else, with such ease, that they exceed expectations of wherever they go. But my bride and I do not make is so pressured that they aren’t allowed to be themselves or even fail.

What I’ve learned in life is that you don’t know how good you can be until you try and fail. It is only then that you have a gauge, a measure for which all other endeavors and attempts are examined against. Your pursuit of health is no different. I don’t like leg lifts, but that doesn’t mean I don’t do them. But I never knew I was going to dislike them until I tried them. And yet, I find myself satisfied when I finish my last set. 1, I am thankful that its over and 2, because I was able to do them. You will never know the mountains you can over come if you are overwhelmed by the foothills. You have to start somewhere, you have to try. Saying you can’t out of the gate is an admission of defeat before you have even started. You have forfeited. The only thing I want you to lose is your negative self-image, inches off your body, and your defeatist attitude.

You have everything to gain in your pursuit of health, but first you have to try.

Try and if you fail, try again and again until you have reached success. Its like the story of WD-40. The 40 stands for that particular compound being the 40th attempt and since 1953 or so its been used all over the country and I am sure the world at this point.

Have a great day and a great work out!